Pondicherry: A delegation tells to the Apostolic Administrator to the Pondicherry-Cuddalore Archdiocese that the appointment of a Dalit Archbishop must be the need of the hour.

The meeting was prompted by the urgency of the situation in the archdiocese in the context of Dalit Christians’ continued struggle demanding the appointment of a Dalit Archbishop there.

“We thanked him [Antonysamy] for inviting us for the talk on the issue. We categorically told him that there is nothing else to talk about except the imminent need to appoint a Dalit archbishop this time in the archdiocese to end the historical caste injustice and discrimination against Dalits within the Catholic Church in India, especially in Tamil Nadu and Pondicherry ecclesiastical provinces,” Mary John, told Dalit Christian Digest.

The Dalit leaders expressed their strong apprehension and of the Dalit Catholic community in the archdiocese about the intention behind his appointment as the Apostolic The administrator there, despite Dalit Christians’ concerted demand during the last few months to appoint a Dalit Archbishop.

“We told him [the Apostolic Administrator] that what our people demand is to do historical justice to end the blatant caste discrimination that is going on for decades and centuries,” Mary John said.

The group reminded the prelate about the assurance given by the outgoing archbishop Antony Anandarayar on December 29, 2020, to the DCLM delegation and the Dalit Catholics, gathered there in large number, and in the very presence of the Archdiocesan administrators, that only a Dalit Archbishop will be appointed now for the archdiocese, and that he had already written to the Apostolic Nuncio in India and the Holy See strongly recommending it.

Anandarayar appealed to the DCLM delegation to rest assured and not to protest. They also brought to his attention the assurance given by Archbishop Antony Pappusamy, the president of the Tamil Nadu Bishops’ Council (TNBC), at the national level Virtual meeting on October 6, 2020, with about 25 Dalit Christian leaders, that he was aware of and concerned about the injustice to Dalit Catholics in the matter of their representation in the Catholic hierarchy and that he would do his best in his capacity as the president of TNBC.

Pappusamy promised to write to the Apostolic Nuncio in India strongly recommending appointing a Dalit Archbishop in Pondicherry-Cuddalore archdiocese and Dalit bishops in the existing vacancies in Tamil Nadu, and that he would tell the other bishops also to recommend Dalit priests.

“We categorically told the Apostolic Administrator that it is now his responsibility and duty to take steps with the Apostolic Nuncio in India and the Holy See to get their assurance fulfilled,” Mary John said.

DCLM group told that it is an injustice and caste inequality continuing for decades and centuries and perpetrated against the Dalits who comprise the majority within the Catholic Church. Their exclusion from the hierarchy cannot be justified with the pretext of God’s grace or in the name of the Christian faith.

“We told that, as the Apostolic Administrator, it is his responsibility to inform and appraise the Apostolic Nuncio and the Holy See on the seriousness of the situation, the agony and the anger of Dalit Christians over the prolonged discrimination and the justness of their demand,” Mary John said.

According to him, equality and equal opportunity of other Dalits in the Indian society are protected and promoted by the Constitution and Government of India, as for example, Dalits have been twice appointed as the President of India, appointed as the Chief Justice of India. But Dalit Christians are kept in very low status within the Catholic Church.

“We asked him whether our faith is against equality, inclusiveness and social justice. We requested him to tell these truths to the Apostolic Nuncio and the Holy See and forthrightly recommend appointing a Dalit archbishop instead of trying to put the onus or blame on them,” he added.

DCLM delegation told that the historical injustice to Dalits within the Catholic Church is well known to all the bishops, cardinals and superiors in India. But they do nothing about it only because of their staunch caste mind set and hegemony. That is why DCLM is left to protest in public so hard and so painfully.

During the last 15 years about nine appointments of bishops and archbishops were made but none from the Dalit Catholic community, despite Dalit people’s repeated appeals and representations peacefully and reverentially during the past 30 years, placing trust on the hierarchy and authorities that they would do justice. But nothing has changed in the situation and their voice is not heeded.

“Our Dalit Christians are only cheated and gravely disappointed and they have lost all hopes. Now people are waiting to see if a Dalit archbishop would be appointed to the Archdiocese and it is the last chance they are hoping for. If not there will be a widespread and more vigorous struggle by them in the archdiocese as well as in other dioceses of Tamil Nadu,” Mary John explained.

DCLM has informed the Apostolic Administrator that if the hierarchy fails to appoint a Dalit archbishop even in this chance, it will not care about the bishops, archbishops, the cardinals and other superiors hereafter and approach them with its appeals and representations, for dialogue, as it is all proving to be absolutely useless and it finds them not trustworthy. So, it would be forced to take the following action to get its justice and rights and they are responsible for this.

DCLM would take concerted measures to raise the issue of untouchability and caste discrimination within the Catholic Church with the federal government of India and ask for its intervention.

“We will appropriately raise the issue in the Supreme Court of India as the caste inequality, untouchability practices and discrimination suffered by Dalits within the Catholic Church is against the Indian Constitution,” Mary John said.

“We will have to question the presence of the Apostolic Nunciature in India which continues to promote caste domination and discrimination of Dalits within the Catholic Church comprising the majority, by not appointing Dalit bishops and archbishops to the Catholic hierarchy, which is against the Indian Constitution,” he said.

DCLM will take up public demonstrations and fasting to appeal to the Pope to end the discrimination against Dalit Christians in the Catholic hierarchy in India.

“We would appeal to the Pope to appoint only Dalit bishops, archbishops and Cardinals till their fair and equal representation in the hierarchy is achieved, or else to stop appointing bishops in India. We are forced to take this action because the Indian Catholic Hierarchy prevents our peaceful representations, our voice and fraternal appeals reaching the Pope and they do not tell him the truth about the caste discrimination,” he added.

DCLM has asked the Apostolic Administrator to convey this to the Catholic hierarchy as an early warning. If they do not heed even now, DCLM is determined to go ahead with the above steps.

“We also conveyed and appealed that it would be honest and just on his part or and other non-Dalit bishops part not to accept if they are offered to be appointed archbishop of Pondicherry-Cuddalore, but instead to recommend appointing a Dalit Archbishop at least this time and show their solidarity for justice to Dalits within our Church,” Mary John described.

Antonysamy acknowledged DCLM’s concern and reasons. He acknowledged that he is familiar with the situations in the archdiocese and certain problems and discriminations, especially in appointments of priests to parishes and institutions. But he expressed doubts about his present role and how far he can speak and act on the appointment of a Dalit archbishop now in the existing vacancy.

“Our delegation insisted that he definitely has the authority and an important role as the Apostolic Administrator and nothing prevents him to write to the Nuncio and the Holy See about the truth of the historical injustice and the ongoing struggle against it by our victim Dalit Catholics,” Mary John said.

Antonysamy finally told that he definitely understood DCLM’s views and sentiments and its justice cause and that he felt one with it and would speak for its justice. 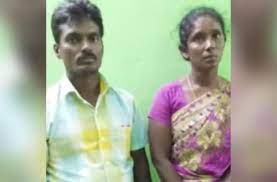