The recent appointment of the non-Dalit bishop to the diocese of Salem dismayed the Dalit Christians in Tamil Nadu, India.

Pope Francis appointed Father Arulselvam Rayappan from the Archdiocese of Pondicherry–Cuddalore as the Bishop of Salem on May 31.

Many Dalit movements have protested against the appointments of non-Dalit bishops in Tamil Nadu. The Dalit Christian community stands together against this which was done based on caste.

The Dalit Christian Forum of Pondicherry Archdiocese took the lead to organize the Dalit Christians in Tamil Nadu and held different forms of protest and other Dalit movements joined together. They started with the Twitter Trending Program on June 10.

The Dalit Christians from all the corners of Tamil Nadu aggressively participated. Years of disappointment and betrayal, Dalit Christians sat for three hours continuously and stormed Twitter. The Twitter handles used the hashtags like Appoint Dalit Bishops and Stop Nepotism in the Catholic Church in Tamil Nadu.

Five hundred Twitter handles participated and the total number of Tweets and Retweets was 6500 and it has reached 11000 handles.

People even from the rural areas took the training on how to use the Twitter App and stormed online. Pope Francis, Propaganda Fide, Exaudi News, Catholic News, Cardinal Peter Kodwo Appiah Turkson, President of the Pontifical Council for Justice and Peace, Cardinal Luis Antonio Tagle, prefect of the Congregation for the Evangelization of Peoples (Propaganda Fide), and the president of the Federation of Asian Catholic Bishops Conferences and Myanmar Cardinal Charles Bo of Yangon were tagged.

“It is a new initiative which we the Dalit Christians have never done before and I believe that this would create a big impact on the Church hierarchy” speaking of Twitter storming, said Babu Chinnappan, a social activist and the Regional Coordinator of Tamil Nadu Bishops’ Council (TNBC)  Commission for Scheduled Castes and Scheduled Tribes.

In the previous years, the Commission sent letters to the Vatican but it did not cater to said demands. “I wholeheartedly thank the Dalit priests, religious, Dalit and social activists for supporting and making a huge success,” he added.

On June 11, it was an email storming program. Christian Peoples Forum (CMK) of Tamilnadu, that keeps on raising Dalit Christians’ voice against the perpetuation of ‘exclusion, discrimination and disability based on caste’, within the Indian Church, which equates ‘racism and apartheid’.

The Roman Catholic Church which is still large among all denominations in India segregates, humiliates, disadvantages and victimizes ‘Christians of untouchability origin’, generally identified as Dalit Christians, who form a majority, according to the websites of Catholic Bishops’ Conference of India (CBCI) and the Vatican.

Besides the prevalence of parish and institutional level discriminations that subjugate Dalit Christians at all levels of equal participation, administration and beneficiaries, the Church hierarchy is also abominably in the hands of non-Dalits from the day of the advent of Christianity in India. For example, out of 188 Catholic Dioceses in India, only 11 Bishops are from the Dalit origin and out of 34 Archbishops only one is a Dalit and out of four Cardinals, no one is from the Dalit background.

In the past 14 years, there have been no bishops from the Dalit community appointed. It was in2007, Sounderraju Periyanayagam, the late bishop of Vellore, was appointed and he passed away last March 2020.

Since then the Dalit Christians have been demanding the Catholic Church to have proportionate representation, but all their requests and protests became fruitless. To add fire to the fuel, the Tamil Nadu Bishops’ Council continues to promote the non- Dalit bishops.

Out of 18 dioceses in Tamil Nadu, there is only one bishop from the Dalit community and there are many bishops from a particular non-Dalit community.

Access to the hierarchy is the main stumbling block for the Dalits to raise their voice.

Unfortunately, Dalits do not have any representative in Rome nor are they in the leadership position in the Bishops’ Conference. The Dalit Christians try to reach the hierarchy through Twitter as it has direct access to the social media account of the Holy Father as well as other Cardinals in position.

“We hope that the Holy Father and other leaders in the Vatican will heed to the cry of the voiceless Dalits,” said Father Devasagayaraj, the former national secretary to the CBCI Office for Scheduled Castes and Backward Classes.

The appointment of Non-Dalit bishops urges the people to demand to create a DALIT RITE within Indian Church, where Dalit Christians will enjoy freedom, equality and dignity that are ensured by God, the priest said.

On June 13, the Dalit Christians in the Archdiocese of Pondicherry–Cuddalore hoisted the black flag in the Churches and their houses and expressed their dismay.

Children, youth, men and women joined together and participated in these three days programs longing for justice and equality in the Catholic Church in Tamil Nadu.

Jerry Rosario: A humanitarian in donating blood in India 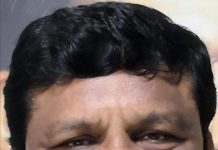