It is a pity that Indian Christian Dalits have not yet understood the Jesus Revolution. That is to say, we have not yet become quite Christian. Do not take offense at this. Truth must be faced, even if it is bitter and biting.

Let me explain what I mean.

Who does not know that Jesus came to set the captives free? Using our idiom, let us say, ‘Jesus came to redeem Dalits’. For our purpose, everyone is a Dalit, until he or she is redeemed by the Messiah. If there is a difference, it is only a difference in awareness. Most people do not know that they are, from God’s point of view, miserable Dalits or ‘broken’ people. Some are aware because the un-aware Dalits stick that label on them. We are used to calling them the elite. So, let us stick with this misnomer.

Logically speaking, to ill-treat a fellow human being, one has to be a perverse and perverted elite, who does not know he or she is a Dalit. This status compounds degradation with ignorance. It is a deadly combination. That is where the elite or upper-caste Christians are stuck. The worse failure of genuine Dalits, as against our elite-Dalits, who think they are the masters of Dalits because Christ licensed them to be so, is that they did not seek to liberate the phoney  Dalits. They did not dare to realize that only they could have set them free.

When God decided to liberate humanity, what did he do? Did not he become a Dalit? The Son of Man, said Jesus, does not have a place to lay his head. He must be crushed on the Cross. Is that not quintessential Dalit-ness? If humanity could have been helped in any other way, Jesus would have entered history either as a Pope or as an Emperor, creating a world of make-believe, presiding over empires of delusion and hypocrisy.

But let us not simplify this too much. The essence of authentic Dalitness –and this is what I implore all my Dalit brethren to heed is not to be measured in terms of what is lacking; as in Jesus not having a roof over his head. That is the terrible mistake we have committed these many decades. The essence of the Jesus Revolution is that authentic Dalit-ness is a mightily positive state. Else, why would he say, ‘Blessed are the poor?

So, what was this mighty positive aspect of the Jesus Revolution? Before I get into a specific answer to this all-important question, here is a semantic clarification. I use the word ‘revolution’ deliberately. The essence of revolution is the passionate determination to bring about a radical change. Nothing which falls short of transformation is a revolution in the true sense of the term. If ever there was an authentic revolution (so let us use the capital R henceforth in this connection) in history, it was the Jesus Revolution. He transformed life itself. Paul was on the ball when he wrote, ‘He who is in Christ Jesus is a new Creation. The old has passed away, the new has come.’

If the plight of Christian Dalits has not changed in its essence –and they stay social, as against spiritual, Dalits- the inference is inescapable: their tryst with Jesus has stayed averted all these centuries. This must change.

So, then? What is the core of Jesus’ Dalitness? And, correspondingly, what is it that Indian Christian Dalits need to imbibe if they are to be elevated from their social Dalitness to the highest of all distinctions: spiritual Dalitness. It is important that we no longer commit the tactical blunder of despising Dalitness. The task at hand –and it is an urgent and imperious one- is to make a ‘new creation’ of Dalitness. It is to unveil spiritual Dalitness in all its redemptive power and glory.

Let me be as emphatic and assertive as I humanly can. The hope of the Indian Christian community hinges on this Transformation of all transformation; namely, transforming social Dalitness into Spiritual Dalitness. But what does this comprise?

What is this heavy, crushing load that never shifts from the back of its victims? Is it not a panoply of elite ideas and assumptions (disguised as religious laws, doctrines, dogmas and customs) random, arbitrary and unquestionable?

It is indeed very surprising that nobody asks, why does this continue? Even when people know that these heavy loads are crushing them, why is it that they do not rebel against it, or walk out? After all, who wants to be burdened and crushed? No one, absolutely! Then, why does this oppressive system continue over centuries? Especially, when it has nothing worthwhile to offer? If it had, would it have invited Jesus’ condemnation?

That is where the power of ideas comes in! The oppressive elite religious structures are erected on elite ideas. For example, it is an elite idea that God likes to dwell in ornate temples! That God is impressed by the religious hierarchy. That a bishop carries greater weight with God than a poor believer. That uncritical acceptance of priestly dictates is pleasing in the sight of God! That the status quo is more important than God’s will. That mindless obeisance to orthodoxy is holier than seeking the will of God and walking the path of righteousness. That God’s favours can be bought with money. Even that God prefers the fair-complexioned.

What did Jesus do? Well, simple and deadly! He inverted all of these. To put it bluntly, Jesus democratized religion. Who else in history has said, ‘religion is for man, not man for religion’? Who else has said that a widow’s two copper coins are more precious than the thousands that rich cast at the temple treasury, if only to showcase their importance? Who else would have said that the faith of the Canaanite woman was superior to that of the Jews? Why, do you think, Jesus took the emphasis away from temples and synagogues and substituted them with the canopy of heaven? Why did he seek his disciples among the least and the underprivileged? Why did he keep priests and religious big-wigs at a distance? Most of all, why did he insist that money should not infiltrate the ministry?

It is in this light that the failure of Indian Christian Dalits needs to be re-visited. It was a terrible mistake to think that seeking a larger share of the cake of elite religious entitlement was the thing to be done! No, it was a tragic deflection from the essential Dalit mission. That mission is the substitution of the reigning, elite assumptions, doctrines and patterns, with liberative Dalit ideas, principles, practices and priorities.

Fortunately, this is not such a daunting task; for Jesus has already generated them for us. Of course, they need to be adapted to the present-day context. That is the scope of the ‘seeking’ that Jesus has prescribed (Mtt.7:7) ‘Seek, and you shall find’ what, and to what extent, needs to be contextually adapted and what preserved and practised as such.

Make no mistake. So long as Indian Christian Dalits stay under the yoke of elite ideas and agendas, they shall remain fooled and robbed of their religious dignity and spiritual destiny. God in Christ Jesus has not called us to be parasites or poodles under tables of elite privilege. God has called us to be partners in the mission to ‘set the captives free’. The very first thing that Indian Christian Dalits need to renounce is the bogus idea that they need to be liberated. No, they are liberators!

Jesus, the Dalit, may be hauled up before Caiaphas, the High Priest. The High Priest may try him with the help, typically, of false witnesses. But Jesus, the Dalit, will stand before him as the Liberator; for that is what he is. It is a terrible thing to be apologetic about who we are. Tell it from the root-top: ‘In Jesus, we are more than victors!’

Jesus may be tried by Pontius Pilate under the seal and authority of Rome. To be a Dalit, within elite systems and structures of politics and religion is to be under trial. But that is not the decisive thing. The decisive thing is what the trial proves in the end. If we are ‘Christian’ Dalits, the trial will end in the trial of those who try us. This has been my experience; not always, but each time I stood on the foundation that Jesus has established for our spiritual robustness. Truth to tell, there were occasions when I did not. The outcomes then were different.

Elite pretensions are under the judgment of history. The winds of time are whistling in bursts of puissant gusts under their tinsel structures. The chaff must be separated from the wheat. The Dalit moment in history has come. The question is: Will we be found up to the task, or wanting, in the critical hour? Castles of elite entitlements, punctuated with pretenses and hypocrisies, will survive only by Dalit default. 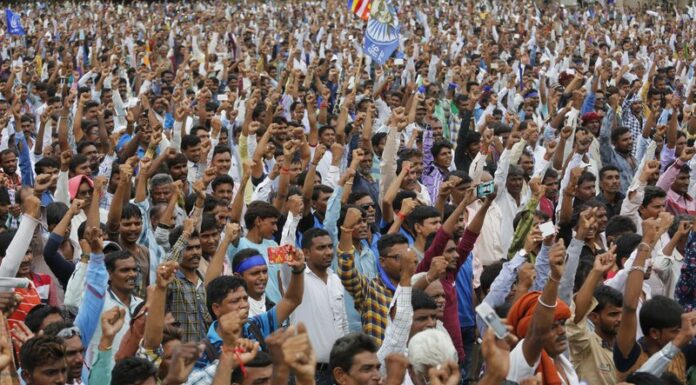