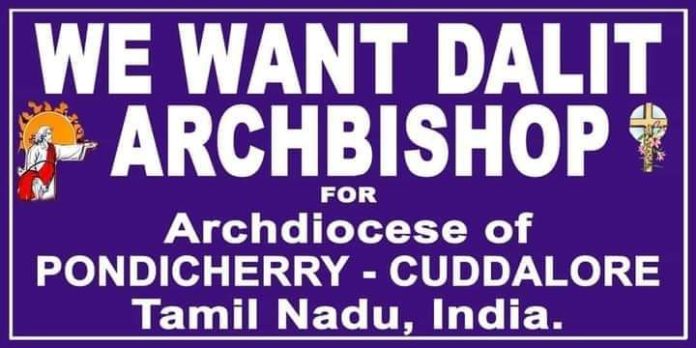 The Dalit Christian Liberation Movement (DCLM) strongly condemns the appointment of a non-Dalit Archbishop again in the Pondicherry-Cuddalore archdiocese, which gravely disappoints Dalit Catholics in India.

The announcement was made public on March 19 that Bishop Francis Kalist of Meerut of Uttar Pradesh state is appointed as the new archbishop of Pondicherry-Cuddalore.

The hierarchy has taken the rare step to transfer the bishop from north India to the archdiocese in south India only to prevent the appointment of a Dalit archbishop there, bemoans Dr. Mary John, president of DCLM.

The Dalit Christians were demanding during the past three years historical justice to them since the four Indian archbishops appointed there so far in the past 70 years are all only non-Dalits,

Even though Dalits comprise about 75% of the Catholics in the archdiocese, no Dalit archbishop has been appointed so far.

This is the reason why Dalit Christians are firmly demanding to appoint a Dalit Archbishop at least this time. But, the fifth one now appointed is also a non-Dalit, which has completely ignored the plight and plea of the Dalit Christians suffering the obnoxious caste discrimination within the Catholic Church.

This is deeply hurting and insulting to the sentiments of the Dalit Catholics as well as derogatory to their Christian faith, said John.

The hierarchy accepted the truth and Justice of this demand, but behind the screen, they take a calculated and cunning move to deceive Dalit Christians by preventing the appointment of a Dalit Archbishop. They continue to stab at the back of the Dalit Catholic faithful who comprise 75% of the Catholics in Tamil Nadu and Pondicherry region, John explained.

It is an act of cowardice to use their Ecclesiastic authority against the oppressed people knowing full well that what they are asking is just and fair.

This great injustice and act of betrayal against the oppressed people are committed in the Lenten season which is observed to remind us about the sufferings and death of Jesus on the Cross for the sake of the liberation, equality and rights of the oppressed and marginalized people in society.

The Catholic Bishops’ Conference of India (CBCI) declared the policy of Empowerment of Dalits in the Catholic Church, but what they do is systematic disempowerment of the Dalits in the Church, which is sheer hypocrisy. They lie to the people, to the nation as well as to the Holy See, and continue to discriminate against Dalit Christians, which is also against the Constitution of India.

“Also, during the past 15 years there have been 13 appointments of bishops/archbishops in Tamil Nadu and Pondicherry region but all non-Dalits only, even though the Dalits comprise about 75% of the Catholics here. If these are not staunch caste discrimination and the practice of untouchability in the Catholic Church, then what is it?” said John.

“We have been writing to the previous Apostolic Nuncios in India and to the present Nuncio, Archbishop Leopoldo Girelli, whom we also met, explaining the situation and providing all justifications for our demand,” John said.

But now his announcement of the new archbishop complies only with the caste dominant hierarchy which suppresses the rights of Dalit Christians. India’s Catholic hierarchy and prelates pretend to be praying especially for Dalits and bless them, observe Dalit liberation Sundays, but they, again and again, prove that they are casteists, behaving like wolves clothed in lamb’s skin.

“If this appointment of the non-Dalit archbishop Francis Kalist in Pondicherry-Cuddalore is not revoked to give way to the appointment of a Dalit archbishop there, then we will be forced to raise with the Indian Government the issue of casteism, practice of untouchability and discrimination against Dalit Christians in appointments of bishops,” John said.

“We will also protest in public to appeal to Pope Francis to stop appointing bishops in India till the local hierarchy takes steps to appoint Dalit archbishops and bishops in adequate numbers,” he said.

If not a Dalit bishop already in office promoted as the archbishop to Pondicherry-Cuddalore, there are so many Dalit priests in Tamil Nadu and all over India, both diocesan and Religious Orders.

Dalit priests are highly qualified, with sufficient administrative experience, with capability and integrity, pious, devoted and suitable and they can be directly appointed as archbishop as it was done in the case of Fr. Dr. Casimir Gnanadickam S.J who was directly appointed the archbishop of Madurai in Tamil Nadu in December 1984, and in a few other cases. This special drive is necessary for this blatantly unjust situation of Dalits’ marginalization in the hierarchy.

“We have been raising the issue and demanding justice and equality during the past three decades. In recent years people resorted to public protest to raise the conscience of the Catholic hierarchy. The people are now agitated by this announcement,” John said.

“We denounce the Apostolic Nunciature in India which continues to promote the caste domination, untouchability and discrimination against Dalits in the Catholic Church,” concludes  John. 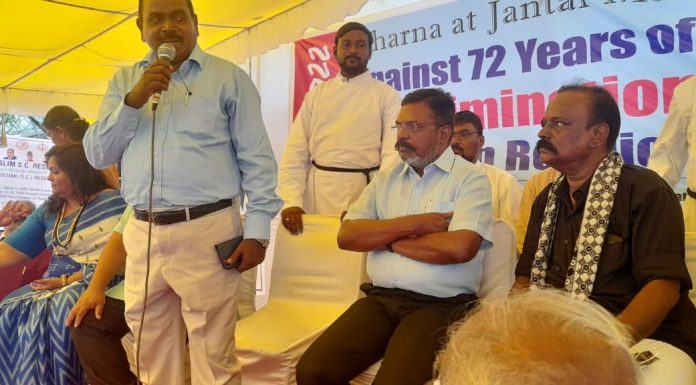