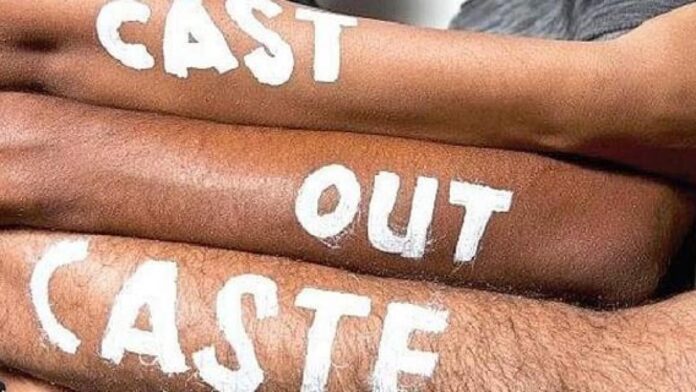 Let it be noted, first, that no one can, or would want to, emancipate Dalits, just as no one else can eat or breathe for us. That idea that liberation is what others have to do to Dalits is a perverse lie invented by those who want to abort Dalit empowerment.

The most basic thing that Dalit Christians have to do in this context is to understand ‘faith’ spiritually. In the prevailing ecclesial and pietistic scheme of things, faith is understood quite contrary to what Jesus meant by it. Christian Dalits can derive a lot of inspiration from the definition of faith in the Letter to Hebrews.

Faith, understood spiritually, is the resource par excellence for liberation. Liberation is from the past and the present. It involves a journey to the future. The Book of Exodus is its stirring, unmatched saga. Instead of this, the pro-status-quo church and Christian groups make a mockery of faith. Faith is misrepresented as the magic means for securing random favours from God. If Christian Dalits had been vigilant, they would have seen that the very Christian elite, who push and propagate this religious absurdity, have no use for it. It is a chimera created for the use of all else, especially the Dalits.

Consider this example. I was once involved in producing a series of short-duration programmes for a Christian TV channel. Several episodes of this serial were shot in an estate in Kerala, a part of which was used for pineapple farming. I was impressed by the size of the fruits growing there. ‘The owners of the estate,’ I was promptly informed, ‘would not eat this. Pineapples are specially cultivated for them in a patch of land, at a distance from here. The fruits here are jumbo-size because deadly chemical fertilisers and pesticides are used here.’ What is sold to the rest of the society with fanfare, will not be acceptable to the people who produce and promote it.

It is crucial to realize that faith is the power to claim a transformed state in the future. What else do these words mean, ‘Faith is the assurance of things hoped for, and the evidence of things not seen? (Hebrews 11:1). Do Dalit Christians hope for something? If they do, what is it? Do they hope for something that pertains to the past? Or to something yet to be realized? Do the Dalits, likewise, have a vision, different from that of the status quo? If their vision is identical to the vision of the status quo, why would it take the ‘faith’ that enables them to see what is not seen? Also, why would they need any ‘evidence’ for it, given that it is already here; especially when they are its victims?

The power to heal the Dalit predicament is adumbrated in faith; provided it is faith as envisaged by Jesus Christ. Note that it is in the context of healing that Jesus refers to faith. Does not healing involve a radical change from what is obtained at the present time? Does not faith reside within the individual; at least, in Jesus’ view? As against this, the church plays the anti-emancipatory trick of making the church the repository of faith! Why? Well, nothing is more effective than this as a strategy to make the Dalits remain dependent and subservient forever. Clearly, the strategy has worked.

If Dalit Christians want a parallel to this trick, they have to look at the caste system. What does caste ideology do to its victims? It takes away from them, through a complex of social, religious and metaphysical tricks, the ‘hope’ of any amelioration in this world. If there is no hope, how can they have any ‘assurance of the thing hoped for’? Notice that caste is also set up on ‘faith’; but faith is defined, not by its victims, but by their victimisers. The preternatural power of caste rests precisely in this. The only way out, as B.R. Ambedkar said repeatedly and emphatically, is to create, or embrace, an alternate faith. He authenticated his theory of Dalit emancipation with the practice of conversion. But conversion, as later realities proved, was –still is-premised falsely.

What Ambedkar should have done was not to convert, but to create. Biblically, creativity –certainly not conversion- is the means for liberation. (We have been brainwashed into believing otherwise.) Jesus was the King of Creativity, not the apostle of conversion. Paul saw this clearly. He wrote, ‘He who is in Christ Jesus is a new creation’. We have to be enormously stupid, endowed with an extraordinary capacity for self-delusion, to equate the outcome of conversion with the status of the ‘new creation’.

What does it mean to be in Christ Jesus? ‘To be in’ is to be one with, if ‘what is in’ is not to be a foreign body to the host. Now, consider the hypocrisy we are injured to. The church, we are told, is the body of Jesus Christ. Through faith in Jesus, we become members (not parts) of that mystical body. But did the Dalits become so? Are they not even today ‘foreign bodies’ within the so-called Body of Christ, though the crudity of this dis-relationship is more masked now than before?

[Note: ‘parts’ relate to what is mechanical. An automobile engine has parts. An organic body does not have parts. It comprises ‘members’. We can say a human body has parts only after it is dis-membered or torn apart into many pieces. Christian Dalits are treated as ‘parts’, not as members of the church and the caste Christian community.]

I use the case of ‘faith’ as an illustration here. A host of other issues are involved in this phenomenon that remains to be addressed, which it is the task of Dalit theology to address in due course. I consider it as a mark of the debility of Dalit spirituality that it did not attach due importance to the creation of Dalit spiritual literature. I don’t say this as one ignorant of the difficulties in this respect. Experience tells me that any worthwhile organized effort in this direction will be frowned upon by church oligarchs. They know what it means; especially its liberating genius. It unsettles them.

To me, there are two urgent priorities before the Dalit Christian movement in India. The first is the generation of spiritual insights and understandings authentic to the Dalit condition and perspective. The value, power and urgency of it cannot be exaggerated. I have said this before, but it bears repetition. Nothing changes on the ground if the thinking does not change. And it this change in thinking that the present church set-up, to which Christian Dalits stay co-opted, will not countenance. Its allergy in this regard is a subset of its allergy to the truth.

We need to resonate with the haunting significance of the reality in the church at Laodicea. Why was Jesus, the Lord of the Church, denied admittance into the church? (Rev. 3:20) Why was he kept outside the door, knocking till the end of times? The answer is stated clearly in the text. It was an elite church. The hallmark of the elite church is an allergy to truth; especially the truth about itself. (Hypocrisy inheres in the elitism of every kind.) That was why it became incumbent on the Spirit, to tell the truth to the Laodicean Christians: “For you say, I am rich, I have prospered, and I need nothing, not realizing that you are wretched, pitiable, poor, blind, and naked.” (Rev. 3:17)

At least one thing should be obvious to all. We cannot live on borrowed ideas. As Galileo Galilee used to say, only what we discover for ourselves belongs to us. I would adapt his words to our context and insist, ‘Only what the Dalits create for themselves can be theirs’. So long as we live on borrowed ideas, our plight will remain similar to that of the landless labourers. In material contexts, ‘land’ is the determinant of identity. Everything depends, we know, on identity. In the spiritual context, ‘land’ gives way to ‘ideas’ as the wealth of a people. Those bereft of ideas are a no-people. By neglecting and failing to generate one’s spiritual capital –ideas, insights, agendas-unique to us, Dalits stay mere ‘tenants’ or ‘serfs’ on the church terrain. This needs to change. But how will it change, if we do not break the chain of dependence that binds us? The power to break these chains rests in creativity.

The second urgent need is to have organizational clarity, coordination and comprehensiveness. Ideas will not work unless we create instruments commensurate to their gravity and scope. As Jesus emphasized in his teachings, ‘unity’ is the key not only to effectiveness but even to survival. Dalits remain fragmented. The pity of it is that Dalits do this disservice to themselves.

Here’s a personal experience to illustrate what I mean. Years ago, I was approached by Udit Raj, who is currently in the Congress, to be a national spokesperson of the Justice party he floated. I felt honoured. But I knew that nothing would work, so long as Dalits remained fragmented and politically at loggerheads with each other. So I told him, ‘It will be an honour; but on one condition. Will you work towards forging pan-Indian Dalit unity?’ He, though a Dalit, was not only skeptical, he did not even seem mindful of its desirability. I declined the invitation.

Dalits of diverse description are a majority in India. But they will remain ruled and overridden because Dalits stay confused, disunited and dependent. They will remain so, so long as they do not form a pan-Indian organ to coordinate the agenda of Dalit emancipation and Dalit empowerment. It is relevant in this context to make a passing reference to the Stockholm Syndrome. The Dalits could well be, given their prolonged misery, social degradation and cultural-psychological dependence, be secretly in love with their oppressors. By dint of it, securing casual, random tokens of acceptance and acknowledgement from them could mean more to the Dalits than attaining authentic collective identity and personal dignity through independence and self-affirmation.

Nothing more than a preliminary flagging of the two basic concerns I have sketched above is possible within the ambit of an essay like this. I commend these concerns to all concerned, underlining that the courage to be suspected, vilified, even cast out –as Jesus was- is basic to entering unchartered territories and possibilities. Those who do not want to ruffle the nest of the status quo will stay changed to their disabilities.

In conclusion, let me quote the words of Paul: It is for freedom that Christ has set us free. Stand firm, then, and do not let yourselves be burdened again by a yoke of slavery. (Galatians 5:1) 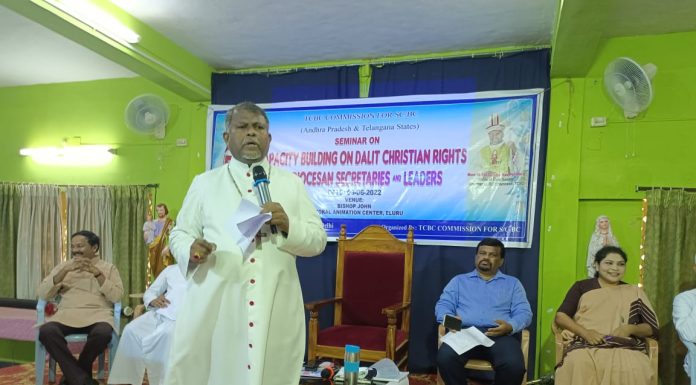