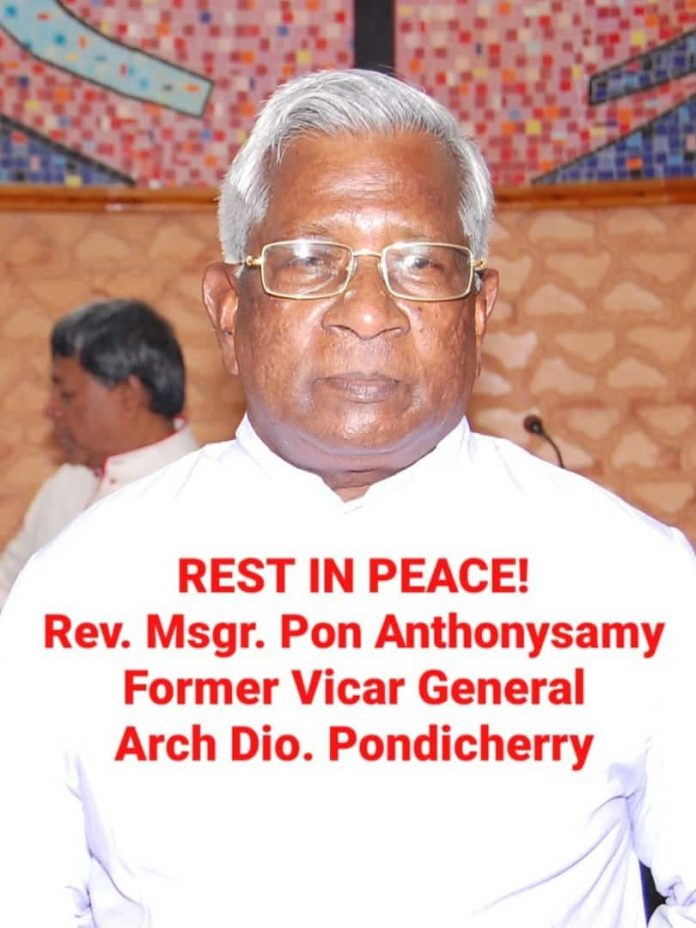 Father P. Antonysamy, former Vicar General of the Pondicherry Archdiocese and Dalit rights activist, died on September 5. He was 82.

His death was due to old age, said Dr. V. A. Rameshnathan, former general secretary of the National Dalit Movement for Justice.

He was a gentle priest, soft-spoken, a good administrator, a peacemaker, and a spiritual person, says Father Devasagayaraj M Zackarias, former national secretary of the Catholic Bishops’ Conference of India, Office for Dalits and Backward Classes.

“He was my parish priest at Kanakkankuppam, Villupuram district when I was a seminarian.

People loved him so much because of his simplicity and love for people,” recalled Father Zackarias. “He was the first priest in our parish who shed away clericalism and related freely with the people.”

Seeing the caste discrimination in the church when the DCLM started, they also conducted a meeting at Kanakkankuppam parish when he was the parish priest.

He was the first diocesan secretary for the Commission of Scheduled Castes and Scheduled Tribes.

He was a councilor and a spiritual guide to them. He was a talented person. Even when he was a seminarian, he used to make birettas (a square cap with three or four peaks or horns, sometimes surmounted by a tuft).

Traditionally, the three-peaked biretta is worn by Catholic clergy and some Anglican and Lutheran clergy). The late Father A. Pichaimuthu used to say that Father P. Antonysamy was best at making it.

People remember him fondly for his love. He built the presbytery at Vellakulam in the 1980s,” said Zackarias.

As the Vicar General of the archdiocese, he embraced all and made amicable settlements through his capacity for peacemaking. He contributed much to the archdiocese and society.

Dalit Christian Liberation remembers their ardent supporters of their movement and offers their condolences.