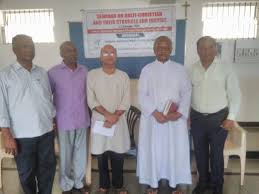 For some, it might be shocking news and for others, priests entering into politics might irritate. As a citizen of a country, everybody has the right to contest in the election but for the priests, it is not their duty to be actively involved in party politics rather encourage the lay faithful to exercise the Christian values of love, peace and justice.

It so happened that Father Jacob from the Belgaum diocese who was working the campaign on Food for Work with the landless workers got a good rapport with the people contested in the Constitutive Assembly in 1983. The people made him file the nomination before he got permission from his authorities.

While the process of the permission was going on, he won in the election and served as the Karnataka State Finance Committee Chairperson for a year but when the then Prime Minister Late Indira Gandhi was assassinated the government was changed and Congress got the majority due to sympathy, says Alphonse Kennedy, the governing Board Member of Caritas India.

Recently, it was Father Rodney Borneo of Calcutta Archdiocese joined the Bharatiya Janata Party which created dissatisfaction among the Christians. And on March 16, there was news that going on viral when a Catholic priest named Joseph Leon from the diocese of Tuticorin, Tamil Nadu filed his nomination to contest in the upcoming elections in Tamil Nadu. He was the former director of Catechism and the Vicar Forane of Satankulam Vicariate.

But what is the response of the Catholic Church and the Code of Canon Law about Catholic priests entering into electoral politics?

In a general audience at the Vatican on July 28, 1993 (later quoted in the “Directory on Ministry and the Life of Priests,” released by the Congregation for the Clergy in 1994), Pope John Paul II said that a priest “ought to refrain from actively engaging himself in direct politics, as often happens, to be a central point of spiritual fraternity.”

The Congregation for the Clergy’s document also quotes from the Catechism of the Catholic Church, published in 1993: “It is not the role of the Pastors of the Church to intervene directly in the political structuring and organization of social life. This task is part of the vocation of the lay faithful [emphasis in original], acting on their initiative with their fellow citizens.”

The “Directory” states further that the “reduction of [a priest’s] mission to temporal tasks, of a purely social or political nature, is foreign to his ministry, and does not constitute a triumph but rather a grave loss to the Church’s evangelical fruitfulness.”

In the church’s official Code of Canon Law, Canon 287 also states that priests “are not to have an active part in political parties and governing labor unions unless, in the judgment of competent ecclesiastical authority, the protection of the rights of the Church or the promotion of the common good requires it.”

We need to promote the Catholic women and men who would do good to others and who want to see a change in society.