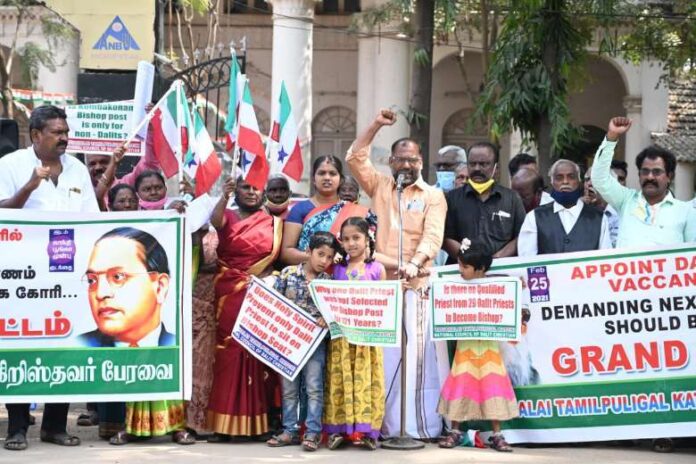 The problem of casteism and caste discrimination against Dalits within the Catholic Church in India has existed for centuries.

This issue has often been raised by Dalit Christians. But over the past three decades, they have become vociferously vocal, especially after the emergence of the Dalit Christian Liberation Movement (DCLM) in 1990.

But the response continues to be one of indifference, resistance and antagonism alongside attempts to malign and criminalize their struggle.

So, Dalit people are forced to take to the streets. The most unfortunate thing is that this truth of casteism and discrimination is hidden from the apostolic nuncio to India and the Holy See. The Indian Catholic hierarchy does not speak the truth to them but only covers it up.

Dalit Christians are left to petition successive apostolic nuncios, Vatican dicasteries and the pope. The DCLM has been doing this for the last 30 years.

Unfortunately, instead of continuing this process, it has been reversed over the past 15 years, prompting Dalit Christians to renew their struggle

Unfortunately, instead of continuing this process, it has been reversed over the past 15 years, prompting Dalit Christians to renew their struggle.

Currently, there is only one Dalit bishop in the 18 dioceses of Tamil Nadu and Pondicherry.  That is the reason why Dalit Christians are now demanding to nominate a Dalit in the vacant Archdiocese of Pondicherry-Cuddalore, which has two bishop vacancies. Two more vacancies are arising in Tamil Nadu.

So, a meeting between a DCLM delegation and the apostolic nuncio, Archbishop Leopoldo Girelli, on Feb. 2 had significance and gained some media attention.

The delegation put the issue to him, but although he listened with apparent concern which gave hope, his observations as reported in some news media were disappointing and rather misleading.

His observation that “there is no discrimination in the selection of episcopal candidates and in the appointment of new bishops” was inappropriate because it amounted to defending the blatant caste discrimination by the Indian Catholic hierarchy in recommending priests.

But the reports on his comments could be misleading. What he actually wanted to convey was that there is no discrimination committed or intended by the nuncio in selecting prelates and he is not responsible for it.

When the DCLM delegation met him, he conveyed a similar view, but insisted we talk only to the local bishops’ council on the issue of exclusion of Dalit priests. The reports should have been more explicit.

This is evident from his comment that the nuncio’s responsibility is only to verify a bishop candidate’s priestly integrity and suitability for the office by strictly following a process determined by canon law. However, we are not blaming the nuncio, only appealing to him to raise the issue with the Catholic hierarchy in India.

The concern is that such a blanket statement will embolden the hierarchy to continue their discrimination, not hold them to account for it.

He only mentioned his technical role and responsibility in the selection process. So, his comments should not be interpreted as him denying discrimination is practiced.

However, it is disappointing to Dalit Christians that the nuncio’s reported comments give reasons to justify the continuing extreme caste discrimination instead of finding ways to change things

Despite this, it is a positive sign that Archbishop Girelli is concerned about the issue and Dalits welcome his openness in making statements touching on caste discrimination in the Church.

There are only 11 Dalits out of about 160 Catholic bishops in India despite Dalits comprising almost two-thirds of the Catholic population. This itself is substantive evidence of discrimination in the hierarchy.

When this is the reality, it is not surprising that Archbishop Girelli’s comments can be interpreted as inappropriate and disappointing.

The policy of the Catholic Bishops’ Conference of India (CBCI) of empowering Dalits talks quite openly about traditional casteism in the Church and all aspects of discrimination existing, including in vocations and hierarchy.

The nuncio says he is aware of the policy and supports and recommends its implementation. He quotes from the policy: “Caste with its consequent effects of discrimination and caste mentality has no place in Christianity”.

It is therefore puzzling how Archbishop Girelli can say there is no discrimination in the selection of episcopal candidates and the appointment of new bishops. In fact, the implementation of the CBCI policy requires bringing about equal representation in the hierarchy.

The nuncio pointed out that the episcopal ministry in the Church is intended as a service to the people and not a symbol of power. But this is no answer to the plea from Dalits to stop caste discrimination. There should be equal representation and participation of Dalits. It is plain and simple.

There are bound to be differences in individuals’ integrity and suitability. It is all relative both in perception and in judging. It does not mean that these traits are not there in the many priests excluded from selection as the number of bishops is limited.

The Indian hierarchy uses the criteria or norms of merit, capability and suitability as the overriding factors to hide the injustice of marginalization of Dalits. But what we need to question are the integrity and suitability of the selection process as it sustains and supports the unjust system.

The nuncio says he must strictly follow canon law in the process of determining the Church’s leadership. But he should not use canon law routinely or as a matter of fulfilling formality, knowing that unjust caste discrimination is involved in the process.

Stopping such longstanding injustice needs appropriate hard and deliberate steps, something more than the usual technicalities and procedural norms

Canon law should not be used to legitimatize a grave injustice. He has the authority to suspend a list of recommended names or send it back to the bishops’ council if Dalit priests are omitted. If not, then what does it mean or to whom is it meant when the universal Church talks about justice, equality and human dignity?

The nuncio’s role in this should not be just a formality without addressing the substantive issue of caste discrimination. Though he himself does not select or propose candidates, approving a list with caste bias certainly amounts to complying with it, though not being complicit.

Stopping such longstanding injustice needs appropriate hard and deliberate steps, something more than the usual technicalities and procedural norms.

The Apostolic Nunciature says it is “aware of the contribution of the Dalit people in the Catholic Church in India” and “always gives consideration to Dalit candidates for episcopacy.” This is not really true when looking at the reality.

This “consideration” should not be by way of charity, generosity or concession shown; it should be in the form of a firm commitment to justice, equality and human dignity for historically oppressed people. Otherwise, the changes needed will not happen.

What Dalit Christians and the DCLM want to make clear to the nuncio and the Vatican is that the Indian Catholic hierarchy does not have the will to change the situation. It is not even ready to speak about it. There is not a single prelate in the Indian Church who stands up against casteism and speaks out for justice and equality for Dalits within the Church.

The nuncio and Holy See must intervene because final authority rests with them in approving and announcing episcopal appointments. They can no longer deny responsibility.

Mary John, a Dalit Catholic leader, is president of the Dalit Christian Liberation Movement (DCLM). The views expressed in this article are those of the author and do not necessarily reflect the official editorial position of UCA News. 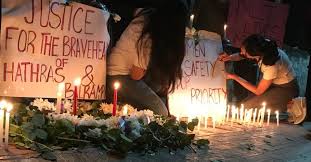