Semitic religions are more focused on creation than the rest. It is central to the Christian idea of the world that God created it out of nothing. But creation as an idea is common to most religions. Understandably, they differ in scope and purpose.

First, a general principle. How we explain the origin of something is an indication of what significance or insignificance we wish to attach to it. Consider the old idea that vermin are born of excreta. It is not a scientific theory on the origin of vermin. It arose out of the general sense of aversion to them. Since they are execrable, they have to have an abominable beginning. Excreta serve that purpose well. The primary thing is not excreta but our aversion to vermin. Excreta become the medium through which that aversion is expressed.

Now consider the Hindu idea of the origin of Shudras. The Brahmins emerged from the mouth, or head, of Brahma, the Kshatriyas from his shoulders, the Vaishyas from his thighs, and the Shudras from his feet. Surely, this is not a scientific explanation of the origin of any of the categories. It is, rather, an etiological flight of fantasy that explains and legitimises the differential value attached to them. The imagination at work here, like in the case of religious imagination in general, is hierarchical. Hierarchy functions in terms of a graded ascription of worthlessness. The intent underlying the Purushasukta is obvious: to secure the supremacy of Brahmins and to perpetuate the degradation of Shudras.

What Christian Dalits need to realize–which they seem most unwilling to do—is that the hierarchical view of life and the world will necessarily go against their interests forever. Why this is so hard to realize, it is difficult to understand. Hierarchy is the reification or concretisation, of inequality. Or, hierarchy, which is an abstract notion, incarnates itself as unequal social and religious gradation. Hierarchy and equality are incompatible. They are like fire and water. Yet, Christian Dalits continue to endorse and venerate a hierarchical ecclesial system in the name of Jesus Christ, who denounced hierarchy in every imaginable way! This is absurd.

Consider the book of Genesis. In the second chapter, we have a peculiar story that explains the origin of women. Eve is made out of the rib of Adam. This version is in stark contrast to the creation story in the first chapter of Genesis, where man and woman are created as equal and inseparable. ‘Male-and-female he created them’, reads the text. What does this amazing statement mean?

It means that the male and the female cannot be vivisected or polarised. ‘And’ in grammar is conjunction. Its function is to link and to integrate. (In certain legal contexts ‘and’ is used to disconnect, but religion is not the same as law!). Read in this way, male and female become one. That is to say, every human being is male and female at the same time. This is consonant with modern psychology as well. It is when cultural prejudices disfigure this phrase that it is read contrary to its original and proper meaning.

A man should also have a mother’s heart if he is to be manful, or complete as a man. It is when patriarchal culture makes the ‘macho’ element the defining aspect of the male that ‘the feminine’ in man begins to be despised. So, a sensitive man is discredited as a sissy. (This has other undertones to which I do not intend to turn.) Was Jesus male or female? Was not he male-and-female? Truth to tell, it is impossible to be an authentic, spiritually beautiful male without also being a female. That is, surely, the idea of wholeness or completeness. No matter how well-developed and perfect you are as a man, according to the cultural notion of manliness, you are, from the spiritual point of view, a fragment of a man so long as you do not develop the heart of a woman.

As I have pointed out earlier as well, women are the universal Dalits in the Christian fold. This is untenable and unjustifiable. So, the need arises to improvise mythological means to legitimise the indefensible. That is the function of the second story. The fact that it exists in the Bible does not mean that it is legitimate or ultimate. Jesus corrected many things affirmed in the Old Testament. He superseded the Mosaic Law, which was unthinkable to the Jews.

Consider this familiar instance to see our concern here in a clearer perspective. God is recorded as having said, ‘Therefore a man shall leave his father and mother and hold fast to his wife and the two shall become one flesh’ (Gen.2:24).  Going by this benchmark, a man, if married biblically, should be deemed as integrated into the household of his wife. But we understand the implications of marriage exactly in the opposite direction. By marrying, a woman loses her home. She leaves her father and mother. In many instances, she is required not only to ‘leave’ but also to ‘abandon’ her home. She is required to suffer a familiar death. Marriage has been understood for long as an arrangement of sanctified disability for women.

Or, consider this. A Christian husband is required to love his wife as Jesus loves the church (Eph. 5:25). Jesus laid down his life for his bride! Does it occur to anyone to use this as a basis for re-thinking the cultural aberration that dominates the so-called Christian idea of matrimony as well as the status of inferiority ascribed to women?

I refer to the inferior to this merely for its illustrative value for our purpose. Where and how does this connect to the plight of Dalit Christians?

Admittedly, there is no biblical creation story about the Dalits. (Naturally! God did not create Dalits.) That does not mean that the anathema of ‘origin’ does not apply to them. In the perception of ‘caste Christians’, Dalit Christians are of mean origin. Ironically, caste Christians, who converted Dalits out of Hinduism into Christianity, are still Hindu in their mindset. Dalits may have ceased to be Hindu, but caste Christians remain furiously Hindu in their attitude to Dalits. To them, Dalit Christians continue to be born from the feet of Brahma, even generations after their ancestors embraced Christianity.

The pity is that the Indian Dalit Christians do not address issues of radical significance such as the one I am flagging here. They lost their way, like Atlanta in the Greek myth, chasing a few stray golden apples, which, unlike in the Greek story, have proved to me imitation-gold apples! Christian Dalits merely begged and lobbied for a few crumbs. They did not take a firm and informed stand on their worth. Rather, they compromised their worth for a few tokens of accommodation. It was their sacred duty to have stood uncompromisingly and clear-sighted on their new identity; given that they, through Christ Jesus, had become ‘children of God’ (Jn.1:12). Instead, they got obsessed with the Dalit part of it and lost sight of the Christian fire–the contemporary burning bush—of their liberation and affirmation.

Once again I return to something I advocated in a former piece. There is a Dalit Christian mission that waits to be undertaken. That mission is the Christ-centred mission to liberate upper-caste Christians, who have abducted the ‘bride of Jesus’. Put in the contemporary, politically surcharged idiom, they have to declare a war on the love-jihad perpetrated by ‘upper caste’ Christians. They should legislate and militate against the abduction of the bride of Jesus for ulterior gains on premises of worldly presumptions and prejudices. The real issue is not love-jihad in the sense in which the Syro-Malabar Catholic Church ‘cries wolf’ in the political backyard of Kerala. There is, make no doubt, a love-jihad to be decried. But that love-jihad is not directed against a few gullible Christian girls. It is directed against the church as the Body of Jesus Christ.

Let me say this once again. So long as the church remains hierarchical, it cannot do justice to Christian Dalits. It cannot accept Dalits as fellow Christians. For pragmatic, economic and political reasons, Dalits will be accommodated somewhere. But Dalits have to be particularly short-sighted and undiscerning to mistake this for acceptance as equal fellow believers.

Are Christian Dalits ‘born again’ through Jesus Christ? Or are they still being born through the feet of Brahma, the Lord of Creation in Hindu mythology?

One thing is beyond doubt. One of the two Christian sections is out-and-out Hindu. Either castes Christians are Hindu in their outlook, or Dalit Christians are. Both cannot be Christians at the same time. It is my plea that Christian Dalits must exercise their God-given right and freedom to decide who, between the two, is Christian. They must also deem themselves obliged to follow up on the implications of their conclusion to their logical conclusions. 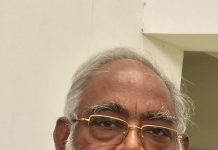