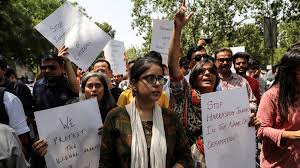 Doyen of the Indian Women’s Press Corps, 75-year-old Mrinal Pandey was charged last month with sedition by the Indian government. She had tweeted about a massive ongoing farmers’ protest in Delhi.

This same month, someone broke into the home of journalist Neha Dixit. She had been physically stalked since September 2020. “The stalker identifies my exact physical location on phone calls and threatens me with rape, acid attack, and death,” said Dixit.

She escaped with her life. She is not so sure about next time. “Looking at the recent precedents where so many journalists, artists, filmmakers, activists, academics have faced violence, some killed, for doing their job, it is imperative that we start paying attention to violence beyond the online world,” she said. Her exposés on the targeted rape of Muslim women and the trafficking of tribal children by extreme right-wing groups have brought on the ire of Hindutva vigilantes.

Hindutva is an Indian fascist militant ideology created by V.D Savarkar in 1928 in opposition to Gandhi’s nonviolent struggle against British colonialism. Its aim was to remove the “sissiness” in Hinduism. Savarkar was later named a conspirator in the assassination of Gandhi. His followers, Golwalkar and Moonje, corresponded with Hitler and met with Mussolini to formulate the ideology that guides India’s ruling party, the Bharatiya Janata Party (BJP). Many of the trolls who impersonate and abuse Dixit with Twitter handles like @Neha_EatsDick are followed by fan pages of BJP leaders.

In September 2017, journalist Gauri Lankesh was murdered at her doorstep. Lankesh had written an article on how three BJP workers had cheated a jeweler of 100,000 rupees ($1,380). A special police investigation team appointed by the regional government revealed that the man who confessed to the murder claimed that he was told to kill to save his religion.

A horrifying picture of the scale and nature of these attacks emerged when I compiled data from recent media reports, and studies by the Thakur Family Foundation, Sabrang Media, Committee to Protect Journalists, Network of Women in Media, Reporters Without Borders, and the Coalition of Women in Journalism; I have also conducted my own independent conversations with some of the victimized journalists. More than 200 women journalists have been attacked physically, in India, in this period. If online violence is added, the numbers have crossed thousands.

Since 2014, the attacks have begun to involve “patriotic trolling,” i.e., violent and misogynistic hate messages at the behest, or with the endorsement, of the government or ruling party. These gendered and sexualized attacks deploy bots, malware, and doxing to send sexual abuse like photos of male genitalia to the journalists’ phone and social media handles.

Muslim women journalists face triple jeopardy. Arfa Khanum Sherwani, a senior editor at the news website The Wire, is threatened on “thousands and thousands and thousands” of Facebook, Twitter, and Instagram accounts, with rape and death. “It terrifies me, it unsettles me,” Sherwani says, describing the loathing she must withstand as a journalist, a female with an opinion, and the additional hatred reserved for her Muslim identity. The bulk of these abusive messages come from handles that adore Prime Minister Modi, she says.

The fact that some of these hate accounts are followed by the prime minister, and that many of the vigilante mob members are associated with the BJP, is chilling enough. What is more menacing is the policy complicity in supporting and promoting the Hindutva agenda. The police do not register cases against the attackers, or hold culprits accountable. This has emboldened the vigilantes with a sense of impunity. The years 2020 and 2021 have been particularly vicious.

Attacks have moved, in larger numbers, from online to physical. The list of women attacked physically by vigilante mobs goes into hundreds since 2014. Women journalists covering the farmers’ protest in 2021, the Delhi violence in 2020, the Shaheen Bagh women’s protest against the Citizenship Act in 2018 and 2019, and the entry of women devotees to the Sabarimala shrine in Kerala in 2018 and 2019 were all attacked by mobs saying they were defending Hindutva.

The attackers used stones, bricks, and batons, accompanied by sexual predation. A young woman, reporting on the harassment of Muslim women in North East Delhi, describes the assault by a Hindutva vigilante mob in August last year: “A middle-aged man exposed his genitals while looking at me. He proceeded to shake his penis with his hand and started making objectionable and lewd expressions, while laughing at me. … All of them started hitting me on my head, arms, chest, and hips.”

Meena Kotwal, a Dalit journalist for The Shudra, a news portal, was attacked by Modi’s supporters when covering his rally in November 2020, while interviewing a young man who was critical of Modi’s policies on education. She says, “The police simply looked on.”

In 2020 and 2021, the police have not only refused to hold culprits accountable and closed pending investigations against the Hindutva vigilantes but have begun to file charges against the women journalists instead.

On October 4, 2020, Anuradha Bhasin, a voice for press freedom in Kashmir, was allegedly assaulted by the brother of a legislator. According to her, a few people barged into her government-allotted apartment in Jammu and ransacked it. Bhasin alleged that the “goons were acting in connivance with the [government] estates department and some police personnel.” Soon after, the office of her newspaper, Kashmir Times, was sealed by the police.

Similarly, police in Varanasi, the prime minister’s constituency, filed a case in June last year against Supriya Sharma, executive editor of the news portal Scroll, for her ground reports from there on the effects of the government’s COVID-19 response on common people. She has been charged with “printing or engraving matter known to be defamatory.”

In April 2020, Masrat Zahra, a Kashmiri photojournalist who has won the International Women’s Media Foundation’s prestigious Courage in Photojournalism Award, was booked under the draconian Unlawful Activities Prevention Act, for “uploading anti-national posts with criminal intention to induce the youth and to promote offences against public tranquillity.” This law allows individuals to be kept in police custody for six months without charges or bail.

According to a November 2020 investigation by news portal Sabrang entitled “Journalism is a deadly vocation for those who question power,” “Journalists who have dared to be critical of the ruling party … in their reportage have had sedition charges slapped on them, along with a bouquet of other offenses under the Indian Penal Code, including fraud, inciting communal hate, using ‘bad language’… violating COVID-19 rules. In places like Kashmir they have been slapped for taking and posting a photograph to asking that basic communication services including the internet be restored.”

India’s rating in the annual World Press Index, put together by Paris-based Reporters Without Borders, has been continuously sliding. The 2020 index has placed India in 142nd position, below neighbors Nepal, Bhutan, and Sri Lanka. The report expressed alarm over the threats to journalists from Hindutva nationalists and specific threats to women journalists. “The campaigns are particularly virulent when the targets are women,” it said.

The abuse can cause psychological injury and professional harm, force women out of journalism, and lead to physical injury and death. Dixit, while publicly speaking about her experience, said: “An integral part of my training is that the reporter is not the story. I only hope by putting this on record there will be a push to demand more action in cases of physical threat against media professionals globally.”

I would like to add my voice to Dixit’s call to action.

On December 6, 1992, I was nearly strangled to death and sexually assaulted by BJP followers who were destroying a mosque in north India. I was there as a journalist. When I decided to speak publicly and at different commissions of inquiry about this, I was physically stalked and verbally abused, my car vandalized and my home broken into.

More insidious, but equally harmful, was the advice by employers, associates, and colleagues to accept the “unintended consequence” of journalism. They said it was part of being one of few women in a masculine public space. Some even said I had invited trouble by going inside the mosque. Others trivialized my testimony by saying I was exaggerating and insinuating that I had spoken up to gain publicity.

I had no legal support or police protection. In the court hearings, I was made to stand for hours, intimidated and harassed by lawyers affiliated with the BJP. I was asked, How could I, a woman from a good family, speak about what had happened to me? Did I smoke? Did I act in TV serials? Why did I have so many male friends? Did I worship god? Where were my scratch marks? Why was I wearing jeans?

My testimony was not taken seriously. I was gaslighted. Those who attacked me were not held accountable.

Nearly three decades on, the violence against journalists, especially women, has become more dangerous and more widespread. I continue to write articles about the misogyny and Islamophobia of the BJP. My face is on a poster that asks Hindutva groups to keep a close watch on me. It has blood spots and lizards decorating its border. Recently, the government froze two accounts of an NGO that I am associated with, which works against sex trafficking. The letter from the government cites an anonymous complaint against me that says I conduct “unconstitutional and anti-national activities by showing India in a poor light abroad.”

If we gaslight the women who report and do not hold their perpetrators accountable, female journalists will be forced into retreat. It will eventually normalize attacks on all press and over time take away the public’s right to access information.

Four men charged with rape and murder of Dalit woman in...