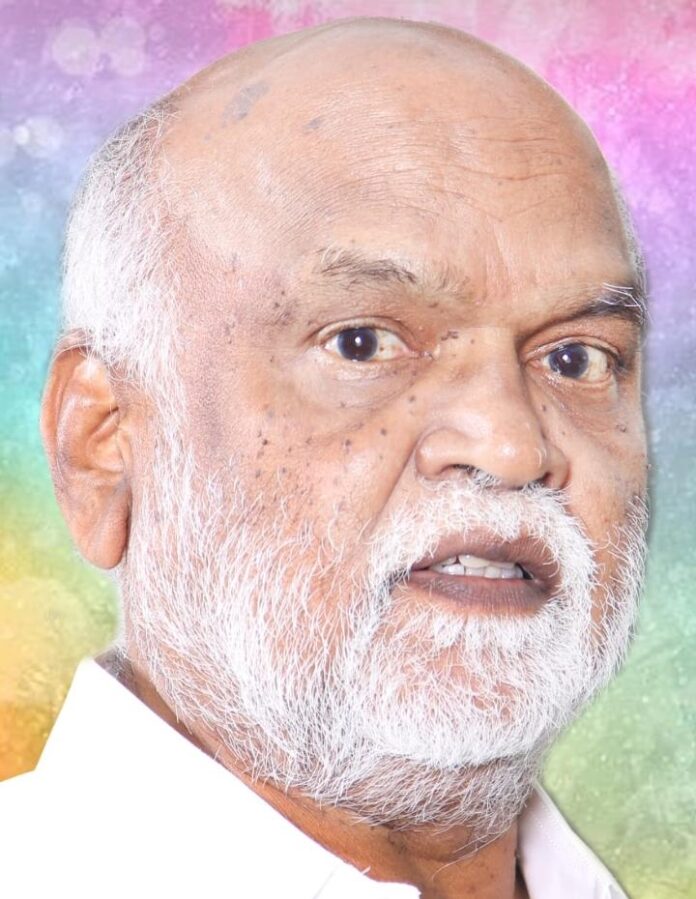 “We have lost a prophet in the person of Father P. Antonyraj, SJ (76). I am saddened and shocked. He became the liberator of my inferior self,” says Dr. Maria Joseph Mahalingam, a Jesuit from Madurai province.

The Society of Jesus has just lost one of its dynamic, courageous, committed, compassionate, prophetic and exemplary sons who could understand and implement its liberative policies, adds Fr. Mahalingam.

Fr.Antonyraj was a great soul who formed many young men and women as social activists. He passed away due to COVID-19 on May 10. He was the founder of Dr. Ambedkar Centenary Academy and the Dalit Christian Liberation Movement (DCLM).

He was born in Kezhaneelithanallur called Meenthulli in Nellai district in 1945. After his return from the USA in 1987, he stayed in IDEAS Centre and researched “the Socio-Economic condition of Dalit Christians in the Catholic Church in Tamil Nadu.”

After getting a Doctorate from the Loyola University of Chicago, USA, he went to the Malligapuram area to thank the people who helped him with data collection. One of them asked him, “Illustrating our inhuman, pathetic and untouchable situation, you have obtained honourable Doctorate! What is the use of your Ph.D. for us?” This question of an ordinary man shook him.

It was a turning point in his life. From that moment, Fr Antonyraj refused to go and teach in Loyola College, Chennai, Tamil Nadu, but worked directly in uplifting the downtrodden, adds Fr Mahalingam.

In his address to the Jesuits at the concluding ceremony of the 150th anniversary of the formation of the New Madurai Mission in Kazhukerkadai in 1987, Fr Antonyraj said emphatically, “Tamil Nadu Church is a Dalit Church. We will be at its centre because we constitute 70% of the Catholic Church in Tamil Nadu. Those who are dominating it hitherto should leave the place to us.”

He demanded respect, dignity, human rights and equal opportunity in education, employment and vocation in the Catholic Church in Tamil Nadu.

He was severely criticised for making such a controversial statement. The more he was criticised, the more he thought of making his statement true. Hence he started uniting and mobilising the Dalit Catholics. Thus he became the founder and president of DCLM with which he was fighting for the proportional representation, equitable justice, dignity and human rights of Christian Dalits.

With the help of Mr Oorkavalan, an engineer, Fr Antonyraj formed many associations like Scheduled Caste/Scheduled Tribe Lawyers Forum and Doctors Forum in Madurai.

In 1992, Dalit Christian Liberation Movement got it in writing from the Jesuit Provincial of Madurai Province that 50% of seats in admissions and appointments will be reserved for Dalit Catholics in Jesuit Educational Institutions.

The hierarchical Church and caste-minded ecclesiastical authorities were shaken. Fr Antonyraj was forced to resign. He obeyed his Jesuit Provincial but continued to support many Dalit movements till the end of March 2021.

From July 26, 1995, violent caste conflicts erupted in the Southern Districts of Tamil Nadu. He encouraged Fr Maria Joseph Magalingam to collect data and analyse it and he published it as a book titled “Kodiyankulam: Munnum Pinnum” in March 1996. The last part of the recently released film “Karnan” depicts what has been described in this book.

Earlier, he strengthened DPI with Malaichamy-Madurai (founder) which was later christened as VCK. He formed many young leaders and some of them are popular today.

After the heinous murder of innocent 12 Dalits and the burning of many houses, Fr Antonyraj built homes for Dalits in Villupuram in 1979.

He also guided people to file a case and get justice in the High Court. Following this painful, tragic and unforgettable event, he decided to dedicate his entire life to the liberation of the oppressed Dalits. Till the end, he was thinking of only the empowerment of the oppressed.

From 1988 onwards, he was the President of JANODHAYAM in Chennai which works for the socio, economic and educational development of the Adi-Andhras, Arunthathiyars who are mostly involved in scavenging work in the metropolitan city of Chennai.

“Fr. Antony Raj identified and trained me to work for the empowerment of the people and he always wanted to demand our rights intellectually,” says George Rajendren, a social activist and the coordinator for the Tamil Nadu Bishops’ Council, Scheduled Caste/Scheduled Tribe Commission.

“The Dalit Christian Liberation Moment expresses its heartfelt condolences to the founder Fr. Antony Raj. In the starting years of DCLM, he worked as the president and I closely worked with him as a vice–president,” says Prof. Dr. Mary John, the present president of DCLM.

Though Fr Antonyraj could not directly work with the movement, he always supported DCLM in the period when the Catholic priests were not part of the people’s movement.

The Dalit Christian Digest honours the great service rendered by Fr Antony Raj and pays tribute to his noble work as the people’s priest.

The Madurai and Chennai provinces of the Jesuits and many poor and downtrodden people mourn the death of a noble priest. May his soul rest in peace with the Lord.