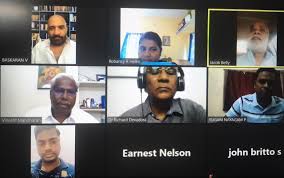 Dr. Ambedkar cannot be coined as a leader for Dalits for he is an international leader who promoted equality and dignity. He was a multi-faceted personality, a jurist, social activist, feminist, and lawmaker. He started the foundation of the Reserve Bank of India. “Christians in India know about the Pope, Bishops and Priests. But we also need to know about Dr. Ambedkar,” said Advocate V. Baskaran, Convener of the AFDCL and NDCW Tamilnadu Chapter. “We got the freedom to practice, profess and propagate the religion of our choice, only because of Dr. Ambedkar.”

Dalit Christians form the majority among Christians in India, both in the Roman Catholic and Protestant Churches. But Dalit Christians are discriminated against in Governance, and at the Institutional and Parish levels in Churches in India, whatever the denomination. However it is more visible in the Catholic Church.

“Vatican Council II has paved the way for inculturation in the Catholic Church and having a separate rite for Dalits will help us to celebrate our faith and originality. Going in the correct direction, the Dalit Christians have given away all that they had to defend their faith and it is a dire need for the Church to listen to them,” said Dr. Devadoss.

Dalit Christians are inclusive by nature. But dominant communites are basically exclusive. The hierarchy of the Roman Catholic Church is over dominated with those belonging to the dominant communites both within this country and at theVatican as well.Therefore merely ‘raising our voice may not bring any result as they would go by the Canon Law as well.They will not give. But we will not stop demanding our rights including a separate Rite for Dalit Christians” said Rev. Dr. Vincent Manoharan, founder of NDCW.

“We need to read about Dr. Ambedkar everyday like reading the Bible. We should read the volumes of Dr. Ambedkar and sensitize people. Dalit Christians are demanding their rights for so long but they have been denied,” he added.